SAY NO TO TURKISH AIRLINES!!!

Dealing with jet lags can seriously be a pain. Especially when you travel back and forth from one side of the world to another in less than a month. Having said that, unfortunately this rant is not about some sort of petty issue like jet lag. This time my rant is about something bigger; something that left me with a mixed feeling of disappointment, anger, patheticity, helplessness, and the list goes on. So here goes my rant about a really bad experience that I had to go through when I traveled home and back flying through Turkish Airlines.

Going back home in three and half years, you can only imagine how high the excitement level can be. Even the sulky flight attendants, the sucky aircraft with no TV screen, terrible food, unannounced delay at the airport, having to buy water at ridiculously expensive price, to name a few problems were all overlooked. Thanks to that overwhelmingly longing desire to be back home and be in the arms of loved ones. Everything was tolerable or tolerated somehow you can say!

The problem however was coming back to the United States from Nepal. The flight gets delayed everyday by about 4 hours at least at the airport in Nepal. Due to this reason, all these people travelling from Nepal are bound to get stuck at some International Airport in Turkey for about 23 hrs plus/minus, depending on how lucky or unlucky you get. It has been happening for over a month and the worst part is Turkish Airlines is doing nothing to fix this.

If they know for sure that all the passengers in that flight are going to miss the connecting flight from Istanbul due to only an hour long transit, why don't they change the flight time in the first place? Its not the story of a day or two that you can simply blame the weather on and overlook. It has been happening for more than a freaking month. What the hell are these airlines people thinking?

The real problem starts at the TAV Istanbul Airport (I looked it up, just too irresistible to not mention the name!). Apparently, its an International Airport with the arrivals of flights from different corners of the world being announced in every two minutes or so. The irony however is that nobody understands English. I honestly found just one person in that whole airport who could fluently communicate with me in English. Not trying to offend anyone, but if its an International Airport, you would expect the workers to at least be able to communicate in a universal language spoken!

We were a bunch of Nepalese people trying to figure out where to go since people working at the airport were just sending us from one desk to another. All we could figure out was that since we had Nepalese passport, we wouldn't be issued even a one-day long visa to go stay at the hotel outside. The in-airport hotel was "already full". If you bear Nepalese passport, their attitude towards you just changes.

The thing that bothered me was even if something sour had happened in the past due to some foolish Nepalese people, how can you punish the 30-40 group of people who get stuck at the airport on a daily basis just because they share the same nationality? Is there some sort of beef going on between Turkey and Nepal? Even if there is how could those people working at the airport be so biased and inhuman?

Everybody else either got the outside-airport or in-airpoirt hotels besides Nepalese passengers. Even without a good place to stay for another 23 hours, we had no idea where were we supposed to go. Some of us were told to go to Passport check point, some were told to go to security, some were told to go to food court. We were so tired making rounds and rounds at the same place with no success of finding a reliable information. If you ask where the food court is, nobody understands you. They just walk away like you just don't exist for them.

Finally after arguing for long, we figured out the way to food court. Even getting food vouchers from the airlines help desk was like fighting some serious war. Even with boarding passes from their airlines, they would say you didn't fly with them and expect you to just smile and say thank you and pay for the god damn overpriced and sucky tasting food. Thanks to the gesture of kindness and unity that runs in our Nepalese blood, we all got together and gave them a good fight. If nothing we at least managed to get food vouchers from them.

At the food court, it sucks for you if you're a vegetarian like me. They'll ask you to pick between two options, both non-vegetarian. If you eat meat you are good, if you don't; well sucks for you! They don't give a flying frack and expect you to still pick one of the two. I'm glad I am not one of those people who gives up easy, so I fought for my vegetarian meal. Then finding a place to sleep was another trouble. Even with empty couches in the rest area, they still send you back asking you to look for a bench to sleep on. After a good argument, we managed to convince them that at 2 am in the morning, no one is going to complain that the couches meant for watching TV are occupied by some tired passengers trying to get few hours of rest.

Looking back, I am surprised how we all managed to survive all that and come back all intact. One lesson is learnt though, if you are some introvert, who can't fight for yourself, better pack lunch, dinner, sleeping bags and whatsoever possible, if you are flying with Turkish Airlines. Even the introverts had reached their breaking point and had started speaking up! The service was that bad! People at the airport were honestly so rude that they were acting as if it was our own fault that we missed the flight and they were doing us a freaking huge favor by answering our questions. Most of them wouldn't answer anyway!

This trip made me realize how inhuman and emotionless some people can be. You're supposed to help these innocent group of people stuck at your airport. These people that your country has asked not to be issued visa because of which they are stuck inside an airport for over 23 hours. All they are asking is for you to be co operative a bit and help them out as much as you can. Instead, how can you just show your "behind" to them and just walk away? How does your inner self allow you to be that stone-hearted?

I wish I could publish this in some Turkish National newspaper; translated in their language of course! Not because I want to intimidate them or to be famous, but to let them know how badly their people are treating everyone else at the airport. Even those non-Nepalese people who managed to get hotels were still complaining about the service, so it was not only Nepalese people. The most saddening part though is how some people are treated so low just because they come from a certain country. Even if there is some beef going on between Turkey and Nepal, why would they punish these innocent travelers by treating them like a piece of shite? I've heard the same story from everyone flying with Turkish Airlines on a daily basis.

So this is not just a rant but a request to all Nepalese people to completely avoid Turkish Airlines. Please think about how your fellow citizens are being mistreated there; it could also be you someday! Its not even that cheap tickets I tell you. If you save about $300-$400 more, you could fly with so much respect and dignity, so why would you pick Turkish Airlines? I'd never felt so much worthless in my life before. I know you only understand the depth of emotions once you go though them yourself but please take these words and do not bother putting yourself in that situation. Its not worth it at all trust me. So please people, spread the word and say no to Trukish Airlines! Lets bring this disrespect based on nationality to an end!

Popular posts from this blog

The day I felt ashamed of calling myself feminist!! 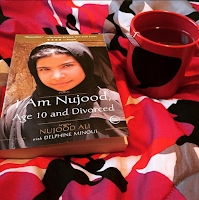 To (especially) all the modern day/keyboard/borderline feminists (Or however you'd like to address yourself), and then everybody else, I highly encourage you all to read the book "I am Nujood, Age 10 and Divorced". IT IS A MUST READ. I shall tell you why in just a moment. I still remember the day I bought this book. It was not so long ago when I took a walk down to Barnes and Nobles and was just browsing around the aisles when I came across this book. Something about the little girl's face grabbed my attention and the look of innocence compelled me to buy it. When checking it out with the cashier, little did I know about all the ordeal that this young soul had to go through and the impact that would leave on me.  I know I have never done book review before, so please ignore my amateurism. The book (non-fiction) is about Nurjood Ali, a girl who was forced by her father to get married at the age of 9. The struggle that she went through after getting married will
Read more

This too shall pass!!! 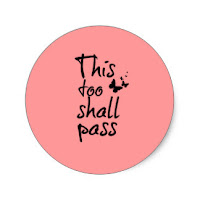 Have you ever felt like quitting everything and just running far away where no body knows you so you could start everything all over again? Or wishing something terrible like an attack or anything deadly would happen to you so all your suffering would come to an end? Most people fear death, but have you wondered about the portion of population who fear the life that they are living instead? While some people pray for a long, healthy life, others could just be praying for it to come to an end. http://rlv.zcache.com/this_too_shall_pass_quote_with_butterflies_classic_round_sticker-r12c8a3cb6c6e43e6b4308f129bad582e_v9waf_8byvr_324.jpg "This is just a phase.. she will get over it!" "Oh, he is just over thinking, give him 2 days and he will come around." "She was literally laughing like 2 mins ago, I don't think she is that depressed." "It's not that big of a deal, you just need a few drinks." Hitting the rock bottom! Worst feeling
Read more